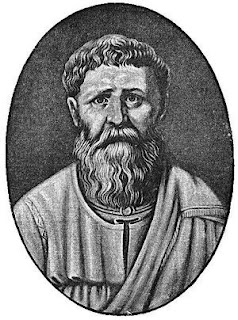 “They, then, are but abandoned and ungrateful wretches, in deep and fast bondage to that malign spirit, who complain and murmur that men are rescued by the name of Christ from the hellish thralldom of these unclean spirits, and from a participation in their punishment, and are brought out of the night of pestilential ungodliness into the light of most healthful piety.  Only such men could murmur that the masses flock to the churches and their chaste acts of worship, where a seemly separation of the sexes is observed; where they learn how they may so spend this earthly life, as to merit a blessed eternity hereafter; where Holy Scripture and instruction in righteousness are proclaimed from a raised platform in presence of all, that both they who do the word may hear to their salvation, and they who do it not may hear to judgment. And though some enter who scoff at such precepts, all their petulance is either quenched by a sudden change, or is restrained through fear or shame.  For no filthy and wicked action is there set forth to be gazed at or to be imitated but either the precepts of the true God are recommended, His miracles narrated, His gifts praised, or His benefits implored.”
-Augustine, The City of God

Here is Augustine, referring to those who criticize and malign the Christians and their God.  Blaming them for bringing the anger of the gods, the dissolution of society, and all sorts of other evils.  In great detail, he points out that their accusations are baseless, and truly illogical from start to finish.  In the end, the only explanation that makes sense is that those who are criticizing them are in bondage to the demons that they worship.

So it is today.  And like Augustine, we must go to great pains to argue and persuade. To plead and teach and show the truth.  But in the end we need to realize, as he did, that our detractors are caught in a trap.  They are in bondage to something greater than themselves, and beyond their control.  The way to break this bondage is the word of God.  Spoken, taught, and lived out in the lives of Christians in the world.  In a world that criticizes, the Christian when hit leaks out truth and light.  In a world that laughs, the Christian becomes Christ to them, for it is Christ who was mocked first.  And in a world that takes even the life from the man or woman of God, it is blood mixed with the blood of Christ, the very drink that will sustain the seeker in his journey to the kingdom.
Posted by Paul Bunge at 1:00 AM

I agree that Jesus is our example. He took mocking from the public and ridicule from His brothers. When in similar situations with friends or family, I think of Jesus and I'm encouraged.