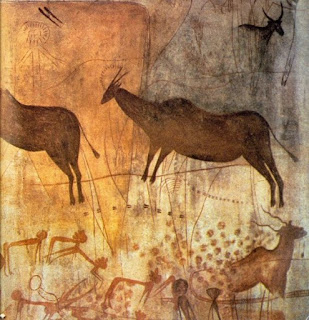 A Quote from Andy Crouch

It is hard to reconcile the definiteness of the Genesis creation stories, where the first human beings are birthed with the same suddenness as a human baby, with the story told by archaeologists and anthropologists, Genesis 1 certainly doesn't require us to think in terms of twenty-four-hour “days,” since the first two “days” are completed before the sun or earth are even created. But its hard to read Genesis 2, where the Creator bends down one day and forms a man in his own image from the clay, without feeling some dissonance with the archaeological record, in which human history seems to fade in, ever so gradually, from the shadows of time. When and whereas there an Adam and an Eve? Isn't the history of human culture both more complicated and less sudden than Genesis would have us believe?

I am not personally persuaded by the valiant efforts Bible-believing Christians have made to fit every detail of the Genesis creation stories into the story told by modern cosmology and archaeology. Yet I am not sure the biblical writers would have been terribly troubled by the failings of Genesis 1-11 as literal cosmological history. The Garden of Eden, after all, is described as being at an intersection of four rivers that ancient people knew had no interaction. Genesis's “primordial story”--the arc from Garden to Babel—needs to be read not in the context of modern judgments of archaeological evidence that the biblical writers knew nothing of, but in the context of ancient creation myths that the biblical writers were keen to counter with their own version of the story.

Even so, the stories in Genesis 1-11 strike me and many well-informed readers as much more compatible with our modern understandings of cosmic and human beginnings than most of the creation myths that were circulating in the ancient Near East at the same time. There are rough parallels between the sequence of days in Genesis 1 and our best guess at the gradual evolution in the universe of light, planets, plants and more complex creatures, with humanity coming very late in the game. Genesis 2 does no claim, like some other ancient religions, that humanity is a separate kind of being from the rest of creation, the offspring of the gods. Instead, we are made from dust—made of the same stuff as the world around us. This too turns out to be surprisingly and, for many ancient people, counterintuitively true…

There is something in us that cannot be reduced to dust—a creative spirit that has the capacity for speech and meaning, in short, for culture. Genesis suggests that this cultural creativity, by which we recognize human beings wherever in time or space we find their traces, is rooted in something just as real as our material being. From Genesis 1 we learn that the world is the work of a Creator, already part of a creative society (“Let us make humankind in our image”) that seeks to bring into being a beautiful, ordered, meaningful world. From Genesis 2 we learn that our creative spirit did not simply emerge from the dust but was breathed into us by the same Spirit that originally hovered over the dark, informationless chaos, speaking a sudden and decisive word that set creation in motion.

To be sure, we don't “learn” these things from Genesis 1 or 2 in the same way that we can “learn” about the big bang from studying data produced by radio telescopes. Then again, there are many things we cannot “learn” in that way. The most important things in our life are learned by trust, not by deduction from experiment.

With their primordial story, the chapters of Genesis 1-11 already stand apart from what follows in Genesis 12 and beyond in their form, style and content. They are less a finely documented history than a story that invites our trust. In this way they are very much like the other bookend of the Bible, the book of Revelation—also a story that stands outside recorded human history, offering us a possible vision of the cosmos's ultimate destination, something we will never be able to attain through investigation alone. Are these two bookend stories about beginnings and endings to be trusted? I believe they are. If there is some way, in the new heaven and new earth, to have access to the whole story of this wonderful broken universe, I will not be surprised if I find that the biblical authors missed some of the details about how God created the universe and the human race. But I am confident I will not feel in any way deceived by them—indeed, I believe I will be unspeakably grateful that, prompted by the Holy Spirit, they told stories that made the best possible sense of the world.

And my reason for extending this level of trust has much to do with the books between the bookends—the much more historically accessible and verifiable story of the people of Israel, their exodus from bondage from Egypt and the eventual arrival of a man who claimed to fulfill all of Israel's original promise. This story, which makes a central claim to history especially at its most radical point, the resurrection of Jesus from the dead, can be tested; it has proven it can be thrusted; and it gives me confidence that the bookends, no less than the book, say something uniquely true about our beginnings, and our ending.

From: Culture Making, by Andy Crouch
(This chapter is somewhat of a detour in his discussion of culture in scripture. He titles the chapter “Interlude—The Primordial Story”)