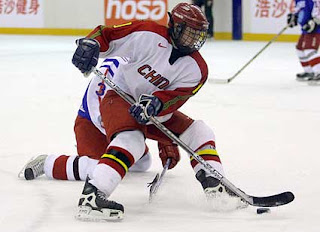 Well, I finally did it. I haven't played any ice hockey in years. I used to play pick up games when I was a kid growing up in Manitoba and Alberta (that is Canada if you don't know), but I can't remember that I have since (ie 25 years ago).

Since moving here four years ago, I have been thinking about showing up for a hockey pick up game at the Sprinker rink. But I never got up the nerve. It's been a year since a patient of mine gave me his old gear.

So tonight, 40 years old and full of fear, I showed up at the rink, payed my ten bucks and went in. A guy named Jeff was already there, and he told me how to get my gear on. Twenty-five years ago in Canada, we wore coats and toques, no "gear." We had to clean off the ice before playing, because the snow would often have fallen. But tonight, 7 of us played on ice crisp and fresh, though artificially frozen.

I impressed myself primarily in that I did not pass out. We played 1/2 rink, which I guess is like 1/2 court basketball. I had the best work-out, and the best time in a long time. I also impressed myself that I did not fall down, I got the puck some times, and I wasn't even the worst player (only second-worst). I am so sore and I know I won't be able to move tomorrow. But I didn't lose any teeth or break any bones.

And thanks to Joyce and Mitch Rosenholtz
Posted by Paul Bunge at 12:11 AM

That is really cool how you faced your fears! I bet you are super proud of yourself, and your family was especially proud. ;)