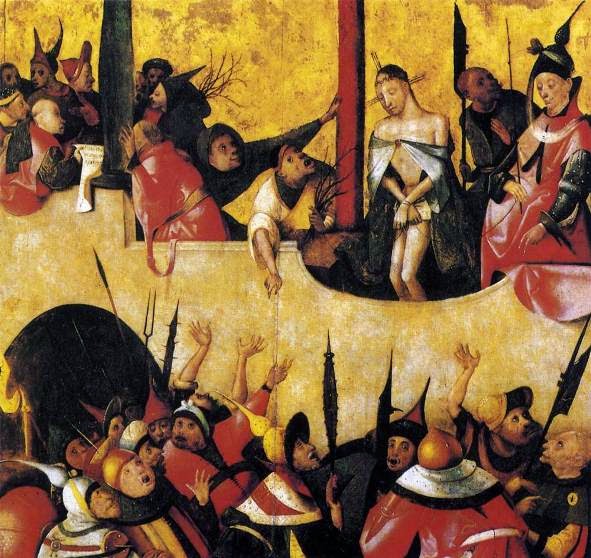 "Look, I am bringing him out to you to let you know that I find no basis for a charge against him"
-Pilate (John 19:4)

Caesar spoke with the Jewish leaders who delivered Jesus to him in John 18 and 19. One can see that the primary goal for both Caesar and the Jewish leaders was expediency. It was not justice, love, truth, God, or really anything connected with the devine, though both groups would claim such. Rather, it came down to what worked for them.

For the Jewish leaders, they feared that Jesus and his teachings would disrupt the security and stability in their lives and in their country that they worked hard to maintain. For Pilate, he knew his role was to somehow keep this volatile Jewish nation from getting out of hand and thus gaining the attention of his superiors.

The Jewish leaders danced around the law, the directives from God, their position as God's people. They brought Jesus to the high priest, brought witnesses in, quoted scriptures when questioning Jesus, in attempt to make this a true Jewish decision. But they could not actually follow the law, knowing so many would be against what they were doing, knowing they had little to really accuse Jesus of. The reality of the world dictated that expediency would need to overrule these niceties.

For Pilate, he did question Jesus, tried to follow rules meant to uphold justice and protect the innocent. But Jesus was being so difficult. And the Jewish leaders were insistent. What would be the use of saving one life if that meant a country in uproar? If the Roman guards had to be called out, how many rioting Jews would be crucified instead? It was a simple matter of statistics that this crazy Jew would need to die. Expediency dictated the unreasonableness of any other course of action.

And for us? If we are honest, expediency directs our lives as well. Whether we work for the government (like Pilate), the church (like the Jewish leaders), or we are in the private world, it is the search for what works in this world that makes us successful. And if not success, even survival dictates walking the path of the reasonable with its often ugly underbelly. The realities of life that dictate decisions that we do not want to make.

Like Pilate, Jesus enters our lives. He makes us quite nervous, as we can see the consequences of His challenges together with our choices. We punish him for standing in the way of our success, angry that we have to walk on him to get to our goals.

Nonetheless, Jesus calls us to follow him. Even in the injustice felt, after the scourging and mocking by the Roman guards, Jesus explains to Pilate where his power and position really come from: the God who is in charge of all things.

The miracle here is not that Jesus speaks and Pilate is born again and turns his life over and goes to church. The miracle here is that even though Pilate does what Pilate will do: sacrifices Jesus to expediency, Jesus nonetheless speaks God's truth to him in mercy and love.

Our hope is not in ourselves: that we will see this story and run from expediency. That is simply not our nature. Our hope is always and only in the person Jesus. That as we trample him, he speaks to us. As we curse him, he blesses us. As we crucify him, he saves us.