It's Easer to Get a Gun than Mental Health Care


Mass shootings are a symptom of our broken health care system.
Published on January 12, 2011
There will be more shooting rampages, like that which targeted Congresswoman Gabrielle Giffords in Tucson last weekend-as long as it is easier to get a gun than mental health care. Our current epidemic of mass shootings is but a symptom of our nation's broken health care system. Poor access to medical care jeopardizes an individual's health. But when the mentally ill or the seriously distressed can't access care, we are all at risk.

As a psychiatrist, I remember when I once did everything in my power to keep a disturbed patient stable, and society safe. I'd see the patient every day, or hospitalize the patient for months, if necessary. Needless to say, this degree of attention is impossible today, given limited resources, and the fights my staff and I regularly undertake with insurance companies to get even routine care approved.
For decades, the American health care system has prioritized profits, often by excluding the sick. This travesty is now coming to roost, in the form of mass violence, such as the recent shootings in Tucson, at Virgina Tech, and in communities across the country, including my own. Medical care for our most disenfranchised citizens will never turn good profits-yet basic health care for everyone, is necessary for the stability of society.
What does it mean that for kids today, the greatest threat of mass violence comes not from enemy powers, but from fellow disenfranchised citizens? As opposed to the duck and cover bomb drills of my own childhood, schoolchildren today do drills to prepare for shootings. Across the country, uniformed officers with weapons rush onto campuses to tackle imaginary shooters, while students run for cover. In Oxford, CT, helicopters and over 150 officers helped stage an elaborate shooting drill. At Scales Elementary School in Tennessee, little kids cried and wet their pants during a drill. In Dallas, police mistook a drill for an actual attack, and rushed onto campus like an episode of Keystone Cops. What have we come to?

Insurance companies have the ultimate say about how often I see a patient, what medications I prescribe, and if the patient can be hospitalized. In the past, I might have provided services free of charge, in the name of patient welfare, my own professional ethics, or for the sake of public safety. But physicians and hospitals who don't prioritize the bottom line are increasingly put out of business. Even St. Vincent Hospital in Manhattan, after 161 years of practicing good medicine but bad business, is bankrupt, gone. Meanwhile, health insurers are among the most profitable companies on Wall Street. It's a perverse distribution of the nation's precious medical dollars.

My own community's worst mass shooting occurred on August 18, 2005, when five people in Albuquerque were shot and murdered by a man who suffers from schizophrenia. For the prior three days, John Hyde sought help, but was turned away each time. His family called his psychiatrist repetitively, but HIPAA privacy laws prevented communications. On the day Hyde started shooting, he sought help from his insurance company.

Hyde was once kept stable for seven years by an old-fashioned psychiatrist who had personal relationships with patients, and who was available at all hours, like all doctors of another time. But when for-profit insurance companies took control of New Mexico's mental health dollars in 1998, Hyde's psychiatrist found himself paid less, while needing to spend just as much time haggling with insurance bureaucrats, as treating patients. In 1998, practicing the same devoted way he had for 22 years, Hyde's psychiatrist, Dr. Jay Feierman, closed his practice with $50,000 in debt.

After Hyde lost the long-term, committed care of his personal psychiatrist, Hyde fell into a system that operates in today's typical fashion. His care was divided between a psychologist for therapy, a psychiatrist for medications, an Emergency Room for problems after hours (which is most hours of the week), with insurance bureaucrats ultimately at the helm of each medical decision. With Dr. Feierman, at least Hyde knew who to call, if he felt unstable.
Effective treatments for serious mental illness only began with antipsychotic medications created in the 1950's. An older, more primary function of psychiatry-dating from the time of asylums-has always been to keep society safe.

We as a society are only as stable as the least stable individual roaming our streets.
How many more tragedies need occur, before we conclude that our mental health care system no longer functions to keep us safe? When will we learn that everyone needs basic medical care, not just for humanitarian reasons, but for the safety of all of us? 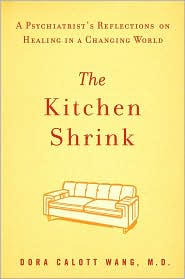 Dr. Wang wrote The Kitchen Shrink: A Psychiatrist's Reflections on Healing in a Changing World. I thought the above piece is very relevant so I quoted it in its entirety.  I have not yet read the book but I just ordered it.
Posted by Paul Bunge at 4:52 PM