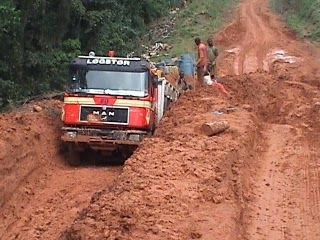 In the depths of poverty, in the heat and the sweat of Western Africa, is the world of red.  Unique red dirt exposed by two great turners of the soil—the African termite raising great mounds of the crimson stuff, and people, clearing the rain forest to show the red clay previously hidden by lush and full vegetation.  The green stands ready to take it back over in an instant when untended. Formed of the clay, “road” is a seasonal term.  That which carries a vehicle in the dry season, swallows it in times of rain.  Houses of people, formed from the red clay into bricks, lose some of their deep color in the drying process as the sun shines mercilessly.   The hands of the farmer are red, constantly moving and forming this soil to make room for the crops.  Using the hand hoe is like spooning the ocean as she bends at the middle to reach dirt, a baby tied on her back.   Clothing is streaked and stained with the soil, mixing earth with the daring colors adopted in this part of the world.  Wearing something white is more like bringing out a canvas than a choice of fashion, for it is only a matter of time for the West African paintbrush to bring that permanent mark from the world of red.

A new red stain has come to this world.  As if years of civil war, anarchy, and misrule were not enough to satisfy whatever demons delight in the separating of the blood from the body of the black man, a people who fear cruel leaders now find an even greater wrath: Ebola.  At first it was a mystery as the patients passed blood in their feverish fits and then died.  But many and assorted doctors from other lands have come in plastic suits and rubber gloves, to diagnose this disease, label the outbreak and collect data.  What has worked in the past they have implemented in hospitals and tents:  intake, isolation, support.  In former days, this demon has been content to destroy a few villages in a quick but containable horror.  Now it has found its way across families and cities and even borders.  Fear and ignorance have been its friend, as patients hide from help, fearing isolation, and useless bush treatments cause even more damage.  One cannot help but notice an adaptation--patterns that have been effective over thousands of years--the isolated village, fear of others, independent beliefs and superstitions.  The village that has been for the people a place in this world, not only of survival in the midst of old-world disease, but a fertile thriving of family, culture, art, and even science and medicine.

The doctor is the foreigner to the scene.  Yet that doctor or nurse was born and raised in West Africa, speaks an unwritten tribal language with his heart and not just his mouth. He nonetheless carries with him the foreign, the unusual, the new approach, saying: “no, we do not want to go back to the village, not like this.  We will use the modern tools to fight this disease, and deliver our people.”  The doctors from the West come as well, assistants to these noble men and women of Africa—all bravely risking their lives as the plague rages on.

The West Africans have changed, dramatically so in fact.  They have laid down their guns, have stopped spilling each others' blood.  They have courageously used the ballot following no longer the empty promises of the bloodthirsty.  And in this outbreak, they have largely followed the request of their leaders to stop meeting, suspend schools, change their greetings which are so important to them.  They have followed the instructions of the world's designated smart people.  And yet, the blood still flows.

What will happen next in this great drama? There was another epidemic virus ravaging Africa, more in the East:  HIV.  It took many years for changes to take place to bring medications and resources already in use in developed countries to the continent.  A few visionaries worked diligently to bring to reality what most people thought impossible or at least impractical:  effective HIV treatments in Africa.  Having the treatments available not only saved lives, it vastly improved the ability to educate people and impact populations.  Those who knew there was a treatment were now willing to discuss the problem, get tested, and listen to the education needed to interrupt the spread.

In the case of Ebola, there are medications and vaccines available, though they need further testing.  The development funding came in part from the US military, which planned to protect its soldiers from the disease.  Will visionaries be able to coordinate with the military, the Centers for Disease Control (CDC), the World Health Organization (WHO), the companies with patents, the doctors on the ground, the researchers, and others, to make treatments available?  Or will there be only nods of “supportive care” when it comes to Africans, who have nearly no access to supportive care in the sense the term is used in the West, which includes blood products and an ICU.

The whole world is nervous, affected, ready to act.  Money is offered.  What is needed is creativity.  Obviously, with a disease that has broken the boundaries of our experience, we need new approaches that break the boundaries of tradition to bring it under control.  Not forsaking what has worked in the past, not lightening up on containment, education, supportive care.  But creatively seeking cure.  Finding out which weapons work best in this kind of battle.  What sanitation systems are needed.  How the family and village support systems can be a help instead of a hindrance.  How an ICU and a blood bank can be built and, more importantly, supported, in such a setting.  How money from outside can be channeled usefully into the already existing research Universities and other structures in West Africa.

God's wrath is red, like the West African soil.  And yet so is the life-giving blood He put into every one of us.  Perhaps in His Providence, God has allowed this time that people whose blood is red might come to help their brothers and sisters in the world of red.
Posted by Paul Bunge at 10:23 PM